What sayest thou of thyself? 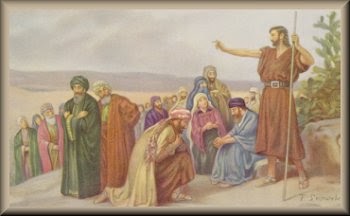 When we want someone to take responsibility, when when we want someone to account for what he is doing, and most especially when what he is doing is not merely out of the ordinary, but seems quite clearly out of bounds or unwarranted, we are accustomed a pointed question: Who do you think you are? Or, perhaps, less direct, but no less pointedly, we ask, What do you have to say for yourself? The idea here is that we take self-definition, self-understanding to be crucial. Who we think we are, what we have to say about ourselves, we hold to be central to assessing whether what we do and how we live is warranted. Consciously or not, we intuit the scholastic dictum agere sequitur esse: action follows being. We intuit, that is, that what things or persons do flows from who or what they are. Since it seems unproblematic that who we think we are is, if not the basis of, then at least central to the kind of person we actually are, then the question is obvious. In the face of puzzling behavior, what better query than, Who do you think you are? What do you have to say for yourself?

It is just this intuition that seems to animate the priests and Levites sent by the Jews of Jerusalem to interrogate John the Baptist.  Confronted by his baptisms, and more centrally his preaching of repentance, and even more attending to the large numbers of people heeding his words, they wanted to know just what warrant he thought himself to have to speak and act as he did. Who art thou? they ask. John, however, does not accept their line of questioning. In the face of their repeated request for a positive answer, for saying something of himself, John issues a series of denials: I am not the Christ or I am not. Pressed to the point, pressed to account for himself, that is pressed to speak his own words on his own behalf, John persists in his refusal. He does, to be sure, make a positive claim about his identity: I am the voice of one crying in the wilderness: Make straight the way of the Lord, as said the Prophet Isaias.

Even here, even when John is willing to confess who he understands himself to be, by what warrant he baptizes and preaches, he steadfastly refuses to say anything of himself. His words, the words that disclose who he is, are not his own. They are the words of the prophet Isaiah, which is of course to say, that they are the words of God. It is God, and God alone, whom John allows to define him, to give an account for what he is doing. It is God, and God alone, who authorizes his baptizing and his preaching, for it is to prepare the way for God's coming, and for this purpose alone, that he has been sent. He does not identify himself, he does not say anything of himself, not to be difficult, not as a display of passive aggression, but rather because anything he would say of himself would conceal, rather than reveal the truth. Who he is, as baptizer and preacher, who his is, as witness to the Incarnate Word and Lamb of God, is not of himself, not the product of his own decisions, but a gift, a grace. It is not what he says of himself, but what God says of him through the prophet Isaiah, that constitutes him, that makes John who he is, not merely in his natural self, but all the more as called to eternal life with God himself.

What is true of the Baptist is no less true of those who are baptized in water and the Spirit. We are who we are in Jesus Christ, not because we have made it so. We share in the life of faith not as the product of our own efforts, our own self-definition. Rather, our new life in Christ, our being called to share in the peace of God, which surpasseth all understanding, is a calling, not an accomplishment. To the query Who art thou?, each of us might have a quite different answer to give, but in this we share a common reply with John the Baptist. It is what God has made of us, who God has called us to be, that makes us to be who we are. This is the source of our rejoicing, this is our motive to cast aside all worrying as though our worries and troubles have the final say. We are who who are, and we say of ourselves, simply that we are Christian, and keep our minds and hearts neither on ourselves nor on our troubles, but in the only source of hope and joy and rejoicing, in Christ Jesus our Lord.
Posted by Fr. Dominic Holtz, O.P. at 5:13 AM

I had a chance to listen to your very stimulating 2013 talk "Divine Personhood and the Critique of Substance Metaphysics," and I was wondering if there is a transcript that I could obtain.

Joshua, the article is to be published (soon, I hope) in a special issue of , which issue is supposed to include at least the principal lectures given at the conference.