We often experience a conflict between what seems to be best for the individual and what is best for the group. All too often, maximizing personal good comes at the expense of the common good, whether by the hoarding or consumption of time and resources, the disruption of common efforts, being absent from those projects that, apart from the contribution of all, fail to produce fruits for any. Even so, the contrary position, that of prioritizing the good of the whole or the many over the good of the few or the one, has been and continues to be, on both small-scale and national levels, the source of grave injustice, trampling on the lives of persons, preventing their flourishing, all the while justifying this action in reference to the common good.

It is striking, then, that the Scriptures use both the collective vision of the good and the individual and personal one as images to understand our vocation in Jesus Christ. In Ephesians, Paul reminds us that we in Christ are one among many, fellow citizens of the holy ones, being built into a temple. This temple, however, is not for us, not for our private benefit, but for God and his glory, a place sacred in the Lord which is built together into a dwelling place of God in the Spirit. Our vocation, as presented in Ephesians, is, in other words, not principally for us at all.

In the Gospel, on the other hand, we hear the list of the Apostles called out not generically, but rather each by name. More than that, the evangelist takes great care to distinguish the specific individuality of each, showing genuine concern that those Apostles with the same name not be allowed to disappear or be effaced by the confusion. So, when he speaks a second time of Simon, who might easily be confused with that Simon who was called Peter, he tells us that this is a different man, Simon who is called a Zealot. Similarly, when it comes to Jude or Judas, lest we think that there was only Iscariot, who became a traitor, Luke makes sure to note that the first-mentioned Judas is the son of James.

What are we to see in all of this? On the one hand, the first image we hear ought to change our perspective of God's activity in our lives. He does not act simply for our sake, for fulfilling our needs and desires alone or promoting and assisting our personal projects. His work in our lives is precisely with the eye to fitting each of our lives with those of others, of making stones for building, shaped to come together not as a mere heap or pile, but as a true building, a temple, crafted to fit together as a dwelling place of the Holy Spirit. On the other hand, the Gospel reminds us that our life in Christ, our life in the Church, does not erase what is most personal to us. It does not come at the expense of what is dearest to who we are, but rather elevates and fulfills us.

This is why we need not fear being drawn into the mystery of the Church, the household of God, built upon the foundation of the Apostles and prophets. To live in the Church is to fulfill what is most worthy of God not in spite of, but because at the very same time it fulfills what we most desire as individuals, as persons precious in the eyes of our Lord, the capstone, our Savior Jesus Christ.
Posted by Fr. Dominic Holtz, O.P. at 4:04 AM No comments: 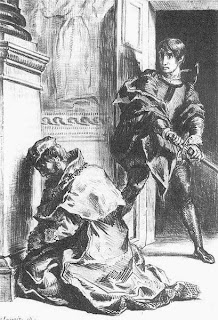 In the middle of the play Hamlet by William Shakespeare, we see, together with Hamlet the prince, Claudius the king, Hamlet's uncle, kneeling in prayer. Claudius is guilty of having murdered his brother, the king (also named Hamlet), father of the prince, and he has now become not only the king of Denmark, but also the husband of Gertrude, the wife of the slain king and mother of the prince. Like the publican in the Gospel, at this moment, struck by a recognition of his grave sins, the king does not seek to conceal his sins before God: O, my offense is rank, it smells to heaven; it hath the primal eldest curse upon't, a brother's murder! Just as the publican himself realized, so also King Claudius does not trust, as does the Pharisee, in his own merits, but rather he trusts only, or at least his words say so, in the grace of God: What if this cursed hand were thicker than itself with brother's blood, is there not rain enough in the sweet heavens to wash it white as snow? Whereto serves mercy but to confront the visage of offence? And what's in prayer but this twofold force, to be forestalled ere we come to fall, or pardon'd being down? By all appearances, this accursed king, sorrowful and penitent, imploring and beseeching the mercy of God, looks in every way like the publican who, as the Lord Jesus assures us, went home justified.

In contrast, we have the example of St. Paul in his second letter to Timothy. While the publican and Claudius say nothing of their own merits, the theme of merit seems to be central to the Apostle, even as it was for the Pharisee. I have competed well; I have finished the race; I have kept the faith. From now on the crown of righteousness awaits me, which the Lord, the just judge, will award to me on that day. And later: The Lord will rescue me from every evil threat and will bring me safe to his heavenly kingdom. For Paul, there is no doubt at all of his justification. For him, as for the Pharisee, or at least his words seem to say so, it is just to proclaim his own merits and to connect them, in one way or another, to his justification and his entrance into the eternal kingdom of God.

The problem here is clear. In the parable, the Pharisee, who trusts in his own merits and proclaims them before all, is not justified, while the publican is. Claudius the king, in contrast, the one who implores the mercy of God by confessing his own sins, does not find justification, while St. Paul, who declares with confidence his merits and his salvation in Christ, is the one who goes to the home of the Father justified. Where does this contradiction arise? Why do we not find something sinful in Paul's words, as we did in those of the Pharisee, and why do not we consider the fratricidal king to be justified by his prayer, given that the Lord teaches us in the book of Sirach: The one who serves God willingly is heard; his petition reaches the heavens?

The solution, I believe, comes from the fact that the difference between the Pharisee and the publican is not to be found in their moral quality — seeing that, all things being equal, only someone confused or morally corrupt would prefer the life of the publican over that of the Pharisee — and neither is it to be found in the kind of conversation they have with God, that is, whether of self-accusation and petition or of thanksgiving and confidence. Rather, the difference is to be found in humility in its proper and full sense. Humility is not some sort of low self-esteem. It is not a refusal to acknowledge and declare the gifts which we have received from God. Rather, the humility that Jesus presents us in the Gospel is nothing other than truth: a truth that is just as ready to take account of the graces received from God as it is to accuse itself of sinfulness. Humility grounds itself not in a self-abasement that is, in truth, a humiliation, a degrading contrary to the dignity of a person created by God and recreated in the life-giving death and resurrection of our Lord Jesus Christ. Instead, it is founded on Truth itself, which is to say, on the living and holy God, the one who confronts us with our limits, with our incapacity in the face of his infinite power, but above all the God who, being eternal Truth and the source of every truth, confronts us with his goodness and mercy, which in its abundance reduces to nothing both our declaration of our own virtue as if it came not from him but from ourselves and our prayers for mercy when we are not ready to find in God, and in him alone, our only source of life, rather than in those things and earthly privileges we have obtained by our sins.

This indeed is what Claudius the king realized: But, O, what form of prayer can serve my turn? 'Forgive me my foul murther'? That cannot be; since I am still possess'd of those effects for which I did the murther --- my crown, mine own ambition, and my queen. May one be pardon'd and retain th'offence? Or, as he concludes: My words fly up, my thoughts remain below. Words without thoughts never to heaven go. In contrast to this, but rooted in the same intuition, St. Paul says in the same letter to Timothy: He — that is, God — saved us and called us to a holy life, not according to our works but according to his own design and the grace bestowed on us in Christ Jesus before time began. And again: Guard this rich trust with the help of the holy Spirit that dwells within us.

Where do we choose to stand? Do we find ourselves with the Pharisee, trusting in our own merits and our own capacities — as professors or students, as administrators or businessmen, as mothers or virgins, as farmers, laborers, politicians, or pundits — or with Claudius, repenting before God without giving up the fruits of our sins, of our private or collective compromises with our personal, common, or consecrated lives? Or, on the other hand, do we stand with the publican, confessing our sins, without pretending to have a virtue that we do not, or with St. Paul, declaring with confidence our salvation, not because of our merits, but because of the grace of our Lord Jesus Christ and the help of the Holy Spirit? Are we ready to trust in Jesus Christ, and in him alone, and in that humble confidence, pierce the clouds, rescued from the lion's mouth, enter through him into the kingdom that lasts forever?
Posted by Fr. Dominic Holtz, O.P. at 5:51 AM No comments: